Share your CDC City Championships stories and photos with us! 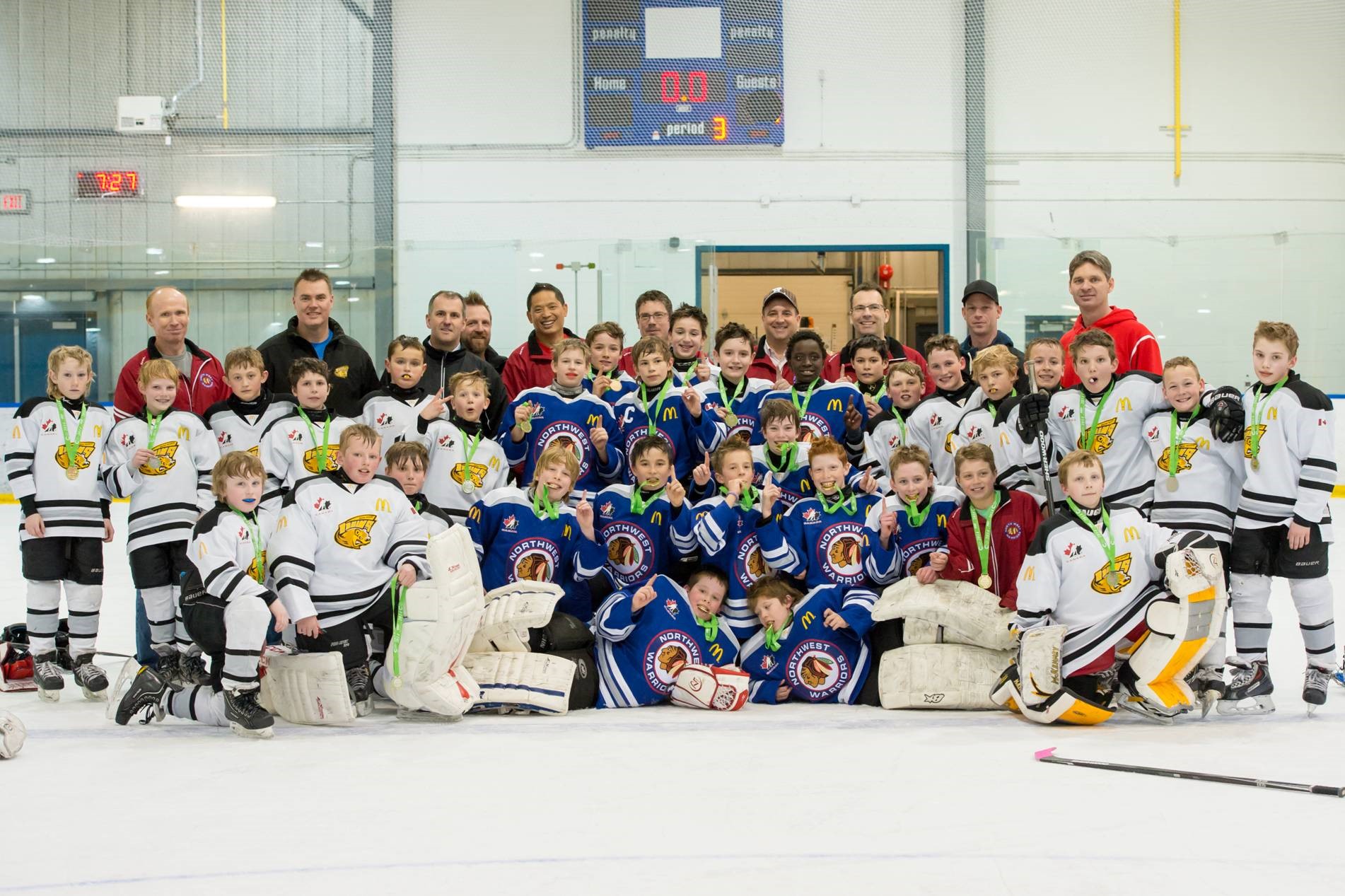 Winning gold is the highest honour, but sometimes we forget, it's also about how we got there. The top 2 teams in Atom Div 1 battled hard all season long and it took 2 games in the City Finals to determine a winner. In the end the NW Warriors took the title, but in a moment of true sportsmanship they invited their Bow River Bruins rivals to share in their victory and take a group photo.  Two teams of fierce competitors who know once the final buzzer sounds, if the players respect one another for the battle they fought, they have all emerged victorious. 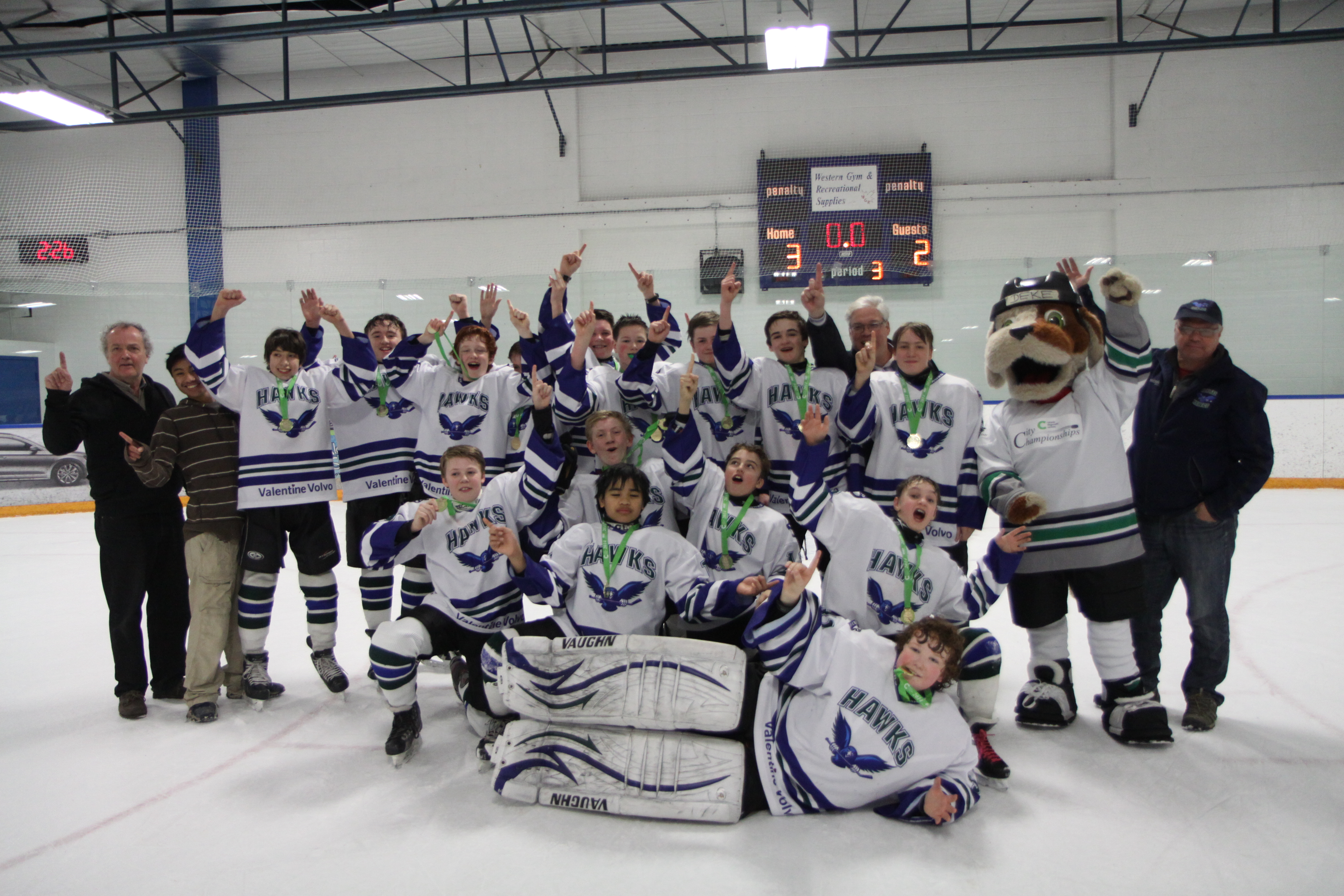 There are many times that we have to remind ourselves that we play hockey for fun.  At one of our games in January we were having a tough game that was starting to get out of hand.  The referee, John Opyc,  handled the situation with firmness, but also with some humour.  John was also able to interact with the coaches during stoppages in play to make light of small mistakes made by both the coaches and officials.  At the end of the game - unbeknownst to me - one of my players approached him which resulted in the following note,

“I have been reffin' for the last 12 years, and have skated many games in the Pee Wee and Bantam levels.  I am over 55 years old and have been in the "lower" levels of both for years.  My goal is to protect the players safety at all times, and try to have the players have fun on the ice.

I have recently reffed (head man) your Bantam 7 team twice now in the last month.  In both cases, the players and coaching staff were the best I've seen.  Both are polite, well coached, and shown a true desire for the game of hockey.  In fact, I received the best compliment any official can receive.  In my last game, which was played on Monday Jan 27th, at 7:00 pm at Frank McCool, a player came up to me after the game and shook my hand, before the team handshake, and said "you are the best referee I ever had".   That is the reason why I officiate hockey.  Hats off to the team and the coaches for a memorable game.” - John Opyc

Without the officials, there’s no game.  There are so many times when the officials are not being recognized in a positive light.  It was great to both have the player recognize John and for John to take the time to recognize the player.

For the March 16, 2014 Bantam 7 championship game game Glenlake was playing McKnight.  We had played McKnight three previous times winning in the seeding round and regular season.  Unfortunately, they knocked us out of and eventually won ESSO minor hockey week.  During every encounter though the players and coaches were respectful and demonstrated great sportsmanship.  During the final game, they stepped it up one more notch.

At 8:20 of the second period we were down 2-1 and one of my forwards (Paul) was racing to get the puck in the opponents corner.  In the race he was bumped by a legal check well away from the boards.  After the contact he lost his balance which caused his head to hit the boards - and then the ice - at which point he did not move.   Our forward coach went out and signalled right away for medical assistance.  At that point the McKnight coach + their medical person came on the ice to help while we waited for the EMS to arrive.  Both teams went back to the dressing rooms while this was resolved, but both teams parents and coaches were all supporting the player and rivalries were put aside.

I was struck by the way both teams rallied to Paul during the incident and beyond.  The McKnight team manager and coach stayed in touch until we knew how Paul was.  He had suffered a concussion, but no other injuries and was able to rejoin the team later that day.

We came back on the ice and were given another 15 minutes of ice time which meant we had limited time to turn things around.  I used the note from the Canadian women’s team to the men as the basis for my pre-game speech.

Little did I know how much that would apply.

Down 2-1 with only 20 minutes of ice time left meant that for sure, "every second counts."  We ended up tying the game with 8 minutes left in the third - though they almost instantly took it down to 2 minutes.  With 30 seconds left we had a change in lines that meant we had one more chance before having to go to overtime. I later learned we would have dropped straight to 2 on 2.  On the resulting rush we had a 2-1 with our center rushing up the right side.  The pass went to our left wing who was able to shoot high right to beat the goalie with 0:03.3 seconds left in the game to win the Bantam Division 7 championships.

This was a great end to a season that saw the players grow as young adults and as a team. It was not without our share of ups and downs including injuries both on and off the ice.