"I would like to nominate Robin Latajka, President of the Knights Hockey Club for the Outstanding Service Award.  Robin has been involved in minor hockey for numerous year in various roles.  She started as a jersey washer volunteer and moved up through the ranks to Age Group Coordinator, Vice President, League Chair and now President.  Robin does not have any children left in minor hockey yet she still works tirelessly for the players and association. If there was ever a need for volunteers Robin would always step up and help out. No job was too big or too small for her.  Even with her busy schedule and no children enrolled in hockey it wasn’t uncommon to see Robin at the arena cheering on the players throughout the season, especially during EMHW and the City Play-offs.  She always made sure she was at the semi finals and final games for the KHC teams.  It is important to Robin that all players feel special and part of the KHC family regardless of age group and division they play in.  She wanted all players to be as proud of being a Knights as she is.  Robin is one of the most dedicated and passionate volunteers you will ever meet."

"Robin has exemplified the values of the Knights Hockey Club throughout her time on the board. She has shown leadership in our community and with our members.  For her community involvement, she oversaw a Brown Bagging snack drive (collecting over 1000 boxes of snacks) and a Veteran’s Food Bank Drive.  She was instrumental in organizing development sessions Friday nights for all our member age groups and divisions and implemented our Squires Program for our U5 players.  She took a special interest in promoting mental health awareness and growth, organizing awareness seminars and raising over $1500 for ConnecTeen during our Stand Up, Speak Out game for mental health wellness in youth.  She also helped organize a teaching seminar for our coaches on how to instruct players with ADHD.  She also grew our Knights HC social media into a force of its own, used to promote our members, educate our followers and encourage people in general to be their best.  She has provided countless hours on her own tasks, and mentoring others with their own.  Our association truly would not be where it is today without her leadership, guidance and passion."

"Kiran has spent his minor hockey career with both with Trails West and Royals programs and has also dedicated much time to developing as an official at the same time. Kiran is very well respected as an official by coaches for his fair and even management of games and has also served as a leader and mentor to young official, which is an extension of his own behavior on the ice."

As the 2021-2022 hockey season started, Glenlake U15 NBC4 team was without a head coach and unable to get on the ice.  After being contacted by the club, Tim Coli, without a child on the team and despite having a busy family of his own, volunteered to take on the head coach role.  He led the first player/parent meeting with a friendliness and humor that instantly put all the players at ease and he’s kept that tone throughout the season.  Tim has gotten to know each of the players, tailoring conversations to their strengths and weaknesses and developing them as individuals and as part of a team.  Tim has consistently asked the players to push themselves a little more and to make small sacrifices and better choices for the sake of the team, such as practicing shooting at home, making healthy food choices and getting to bed early the night before games.  This has encouraged players to see how their actions affect their play and performance of the team as a whole.  Tim never hesitated to share responsibility with the players when the team underperformed and his honesty and candor in those moments taught the players skills they will use life long, both on and off the ice.   Tim’s belief in this team was contagious and the player’s confidence, along with their hockey skills, grew under Tim’s direction.  As I submit this, the team waits to learn who their opponent will be in the City Championship Final and that is a greatly due to the commitment Tim made to the team from day one.  Tim’s dedication to this group of teenagers, their parents and the sport of hockey has been astounding and that’s why I nominate him for Hockey Calgary’s 2022 Coach of the Year Award.

READ MORE OF THE NOMINATIONS FOR TIM COLI

Greg is the type of person who never back’s down from a challenge, he has an exuberance and passion to make the game better for all and gives his heart and soul to every project he takes on.  Greg has a true love for the game, but what sets him apart from most is he really cares about the kids, coaches and families that he deals with on a day to day basis.

Greg has been involved with the Hockey Calgary programs in some way or another for over 10 years.

This year Greg took on an even larger role within the Hockey Calgary program, he became the 1st U13 AA Governor in the newly formed U13 AA League in the Elite Stream.  This was a stream of hockey that was near and dear to Greg’s heart, and when the call for volunteers went out he was quick to put his hand up.

All winter long Greg could be found at the rink at the numerous U13 AA games, monitoring the action, talking to coaches and managers, and just ensuring the program was being looked after.  He was also instrumental in supporting the 1st Annual U13 AA Thanksgiving Classic Tournament that brought 32 teams to our city to compete in this event, as well as the year end City Championship Tournament that was played at NESS in March.

Greg is collaborative leader, with a ‘player first’ mentality in everything he has done.  He is very positive and upbeat with is approach to the game, always putting the kids and their development first in any decision." 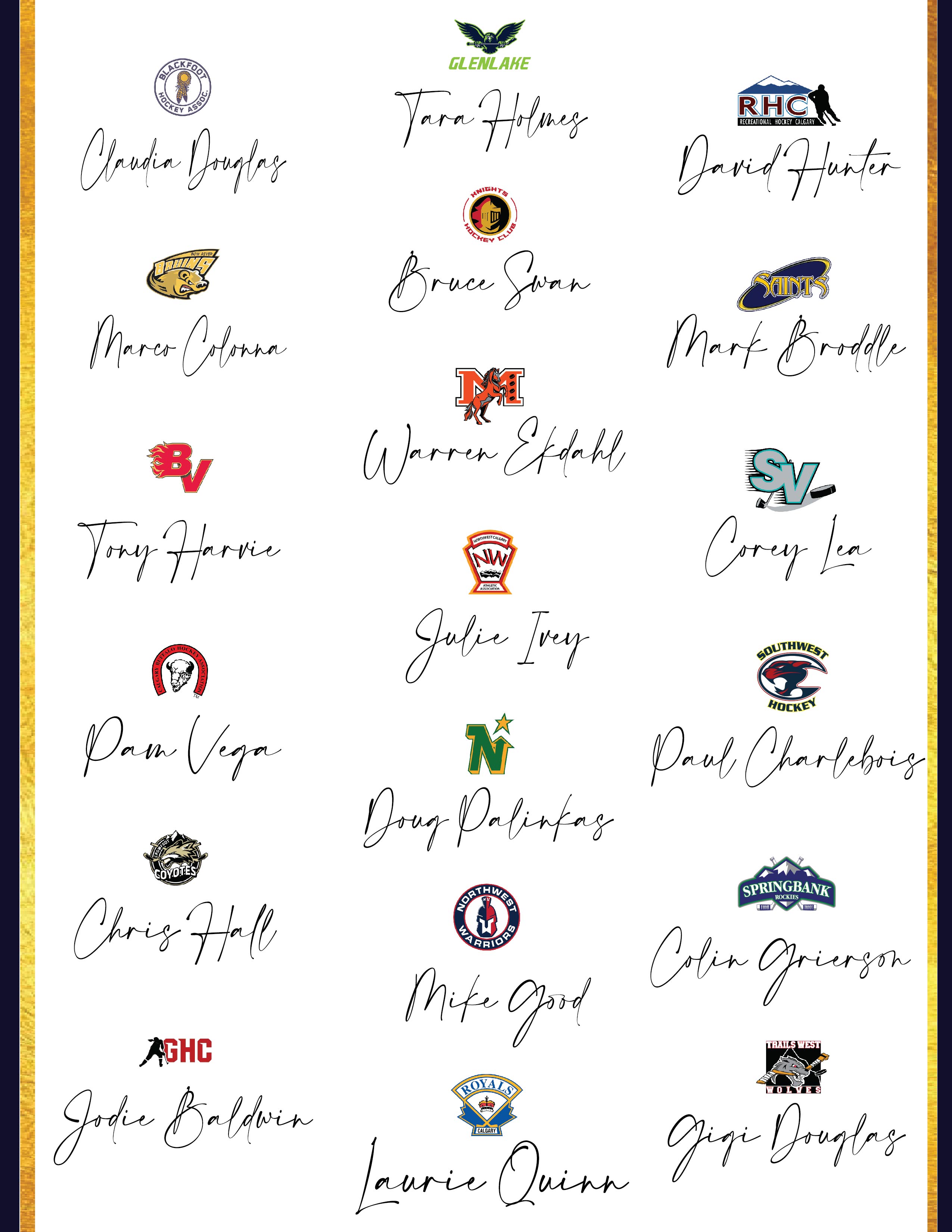 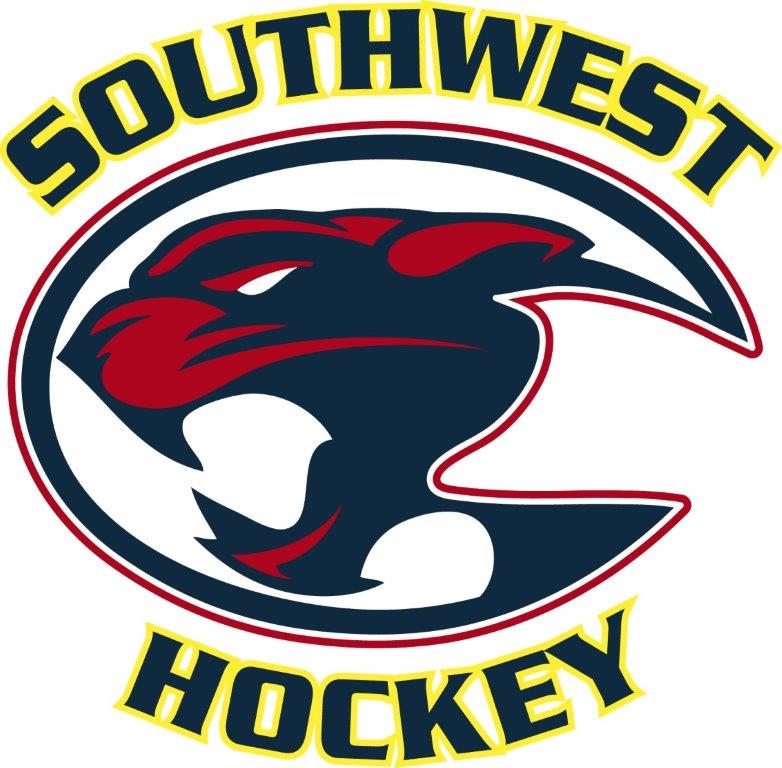 Christen has been a dedicated Hockey Calgary volunteer for the past 9 years. After serving as a League Chair, Christen seamlessly stepped into the U13 Governor position, which she has held for the past 5 seasons. What makes Christen so special is her passion and commitment to her role and to Hockey Calgary. She empowers other volunteers, is incredibly supportive, is an excellent problem solver, and ultimately, she creates an amazing environment for the kids. Christen continues to bring fresh ideas and energy to her role and constantly improves the Hockey Calgary program.

11:45am at Silver Springs Golf and Country Club

8:00am at Flames Community Arenas